Last post on the BP Macondo oil spill/blowout, for now

...though the fallout will undoubtedly continue for decades to come.

BP's atrocity is now officially estimated at having reached 16 times worse than the Exxon Valdez, by as early as the end of June 2010...(and certainly much worse, for being so deep underwater), Dan Froomkin absolutely gets the final word in my book. Read the whole thing.

Posted by Matt Christie at 4:02 PM No comments:

...Been enjoying catching up on This American Life.

Also watched "The Cove". Very moving, all (review here). Meanwhile the more publicized "Whale Wars" has been growing less sappy/sentimental and more effective of late, thankfully. One wonders how the September slaughter season in Taiji is shaping up this year. I'm not sure I'll ever eat sushi again (there was never any danger of going to Sea World). 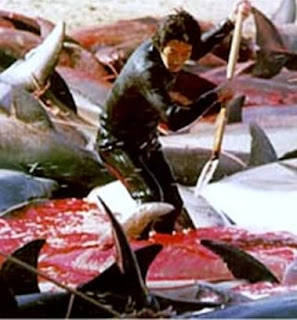 Update: According to the mini-series now airing, Blood Dolphins, the Taiji slaughter is still in operation (only now monitored by police cameras, covered with razor wire and carried out even more covertly behind tarps)...much more here.

The vast majority of Japanese people do not knowingly eat dolphin meat (it is often packaged and sold, deliberately mislabeled as something more desirable, much like Pollock in America), which contains scandalously high levels of mercury poison (cf. Robert F. Kennedy, mercury and autism). Nor do they know about the illegal, misguided and completely unnecessary dolphin slaughter taking place in Taiji and elsewhere on their shores. 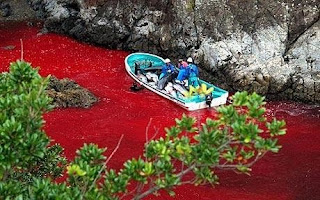 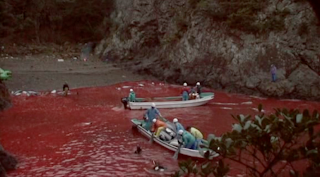 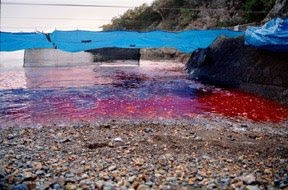 Update: And more and more (and worth repeating once again).

What a bunch of lowest-common-denominator-cable media-milking knee-jerk racist bigots have tried their shameless ignorance-exploiting best to dominate the last few weeks whatever lingers of a "public discourse" in this already intellectually-deprived country, or: In the absence of anything positive to offer, Republicans try to find a wedge issue and milk it, as usual. No surprise, Newt Gingrich is apparently one of those "intellectual" bigots. Sara Palin is quite obviously a bigot. Between the two of them, not a shred of self-earned moral conscience hinders their shameless, opportunist, unintending self-parody/hoof-in-mouth routine. Despicable behavior from pathetic human beings, deserving of far more serious condemnation than the advertising pimp-owned pussy media is currently much capable.

...for the last nine years, at least, people have been trying to block the construction of mosques all over the country.

Now, let's be clear, the subject of the highest profile Muslim structure, 51 Park in New York City, will have a basketball court and a culinary school. Two floors will have a prayer room. The other eleven will host movie nights, performances, group dinners, etc -- it's basically a Muslim YMCA, open to everyone. These moderate Muslims are doing everything we could ask of them. They're trying to build a bridge in the communities they live in, trying to show the world that Muslims are cool and interesting and diverse, and proving that being a Muslim does not equal being a terrorist.

But they're being thrown under the bus by our elected leaders, egged on by some of the ugliest elements of the right-wing. Well-intentioned leaders of the Democratic Party are getting caught up in the fray as well, some of them seeking to find common ground with an implacable opposition. It's not helping.

This isn't just a Manhattan problem. Right now, there is opposition to mosques in Staten Island, Brooklyn, Southern California, Kentucky, Tennessee, Georgia, Illinois, and dozens of other locations across our nation. Where would they move? If public pressure can be brought to bear to take down the most high-profile Muslim community center in liberal NYC, then these other places don't even have a chance, Ground Zero connection or not.

The harassment has to stop, and that starts with you and me.

I think most people agree that Muslims have the right to worship. But these efforts to harass Muslims are based in fear, prejudice, and ignorance. Removing a community center doesn't solve these problems. But talking about religious freedom -- really engaging people -- can open people's minds, and blunt the prejudice.

I pledge to do it myself.

-excerpted from a letter by Arshad Hasan

NB. And Howard Dean, while not necessarily always a bad thing in the world, remains (I say as a fellow Vermonter) just another opportunist, politically-ambitious coward. In other words, he read a poll, smelled an opportunity, tried to be make a savvy move and appear "centrist" and ended up back-peddling frantically from the position of bigot. Too late trying to be Bill Clinton, bub. As he peddles, he makes some otherwise valid-sounding points. Points Keith in particular would do well to mind, needless to say. Or not.
Posted by Matt Christie at 11:01 PM No comments:

Looks interesting...(via)
Posted by Matt Christie at 9:38 AM No comments:

Pioneered the poet as the stand-up comedian...the clown and the "nature-lover"...Part of his carefully nurtured persona is not to take himself too seriously...Has perfected, over twenty years, a brand of poetry candy--take a few variables about known facts, alter one of them, and see where that takes you. A one-trick pony who acts in every poem as if he's discovering the trick for the very first time. His never-discarded mask of humility is how he shows off in his poetry--and outside it. Imagines he is a container for childlike wonder, but actually exemplifies childish incomprehension. Like the others, escapist denial of death is pervasive.

Not that I agree with him about Jorie Graham, nts.
Posted by Matt Christie at 6:16 PM No comments: