The movement enters a new stage...

• Police in Albany know what "good policing" means (not the mayor or the governor). You can thank them, right here.

• Not so much in Oakland. A marine among the peaceful protestors is currently in the hospital with a skull fracture. Despite widespread videos from every conceivable angle, Oakland police officially deny using flashbang grenades and rubber bullets. 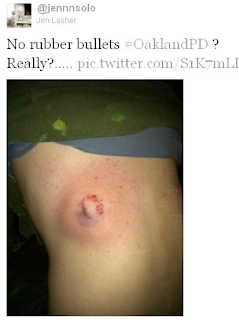 From the Occupiers Journal series:

Chants of "Whose streets? Our Streets!" ring out from nearly a thousand protesters outside City Hall in Downtown Oakland. Standing on the street corner, I see a peaceful but angry crowd. Tensions were already high after police executed early morning raids; firing beanbag rounds and tear gas at sleeping #OccupyWallStreet activists before finally arresting nearly a hundred people.

My morning started by witnessing a man attempt to retrieve his tent from the remains of the campground. Four police officers picked him up and slammed him face first into the concrete right in front of my office building. Busted and bleeding, he was cuffed and tossed into the back of a van.

Now, the crowd marches back to the plaza. Fueled by stories of injured family and friends, the objective is clear. We cannot be intimidated, by police brutality or any other means.

"I hereby declare this an unlawful assembly," one police officer with a bullhorn says. "In the name of the people of California, I order you to disperse. If you do not do so, you will be arrested, subjected to force, chemical agents and possible serious injury."

But we are the people of California? Isn't it our duty to protest insane campaign finance laws? To demand concrete financial reform? To refuse to allow our taxpayer dollars to prop up an unethical system of corporate welfare? While all of these ideas are certainly present, in this moment, the shouting from the crowd is more reflective of a pure, basic emotion. The furious frustration that not only is no one listening but now they are trying to forcibly shut us up too.

And then, flash-bang grenades. Tear gas. Confusion and panic. What was a peaceful protest one second earlier now resembles a warzone. People trip, fall, help one another up, and duct flying flash-bang grenades and tear gas canisters that seem to be fired directly at them.

After three hours, the police finally clear most of the square with this type of force. What they can't seem to understand is that this was never about the square. It was never about this one night. It is about a collective effort the change the narrative to something more reflective of what people are actually experiencing in their daily lives. It is about cultivating the space to allow an expression to gradually and organically develop into a movement. We aren't there yet. But we are going back tonight.

• "Prepared for winter. We're going to be here for a while:"

Where Do We Go From Here? Occupy Wall St. from Ed David on Vimeo.

Posted by Matt Christie at 8:50 PM No comments:

Posted by Matt Christie at 12:41 PM No comments:

• All the live streams are collected here: http://www.iamliverightnow.com/

• Denver (and Seattle) were shut down by police this morning (some arrested). Huge crowds and victory in NYC this morning.
Posted by Matt Christie at 12:57 PM No comments:

• Matt Taibbi "My Advice to the Occupy Wall Street Protesters"

• Elizabeth Warren has announced that she has raised $3.15 million in just six weeks, with 19 out of every 20 donations under $100. Show your grassroots support and chip in $3!

If we believe democracy is the best way to govern our residential communities, then it likewise deserves to govern our workplaces. Democracy at work is a goal that can help build this movement.

We all know that moving in this direction will elicit the screams of "socialism" from the usual predictable corners. The tired rhetoric lives on long after the cold war that orchestrated it fades out of memory. The audience for that rhetoric is fast fading, too. It is long overdue in the US for us to have a genuine conversation and struggle over our current economic system. Capitalism has gotten a free pass for far too long.

• Occupy Boston could use some timely support.

Posted by Matt Christie at 1:00 PM No comments:

Posted by Matt Christie at 11:14 AM No comments:

David Koch is a cancer survivor. He also knows that one of his factories is giving cancer to an entire town, and the EPA (thanks in no small part to his own lavish campaign of lies) is too weak to stop it. What kind of person does this? Someone for whom there is a special place in hell, if only such a place existed. David Koch can re-join Ayn Rand there.
Posted by Matt Christie at 8:41 AM No comments:

Posted by Matt Christie at 3:18 PM No comments:

• "Attorneys General Settlement: The Next Big Bailout" by Matt Taibbi

• http://www.livestream.com/globalrevolution
Posted by Matt Christie at 7:37 AM No comments:

Today is a big day for Occupy Wall Street

Meanwhile, in the news this morning:

Some of the nation’s largest banks are being accused of defrauding military veterans and taxpayers out of hundreds of millions of dollars. In a new lawsuit, companies including Wells Fargo, Bank of America, J.P. Morgan Chase, CitiMortgage, Countrywide Home Loans, Washington Mutual Bank and GMAC Mortgage are accused of illegally raking in hundreds of millions of dollars through hidden fees in the refinancing of veterans’ homes. The loans have been available under a government provision for retired or active-duty veterans. The case was brought by two whistleblowers who work as mortgage brokers in Georgia. They allege over one million veterans may have been subjected to fraud, and that the fees may have pushed tens of thousands of loans into default or foreclosure, at massive cost to taxpayers.

Everything's fucked up, and nobody goes to jail.


Right Here All Over (Occupy Wall St.) from Alex Mallis on Vimeo.

#OccupyWallStreet
Posted by Matt Christie at 11:47 AM No comments:

Very Much Alive and Growing: Day 14 of Occupy Wall Street

• The testimonials on http://wearethe99percent.tumblr.com/ keep coming, and they are downright heart-breaking.

• There is a new central hub for all the protests springing up in each state, here: http://www.occupytogether.org/

• From a great article in The Guardian:

But the ultimate failure here is of imagination. What we are witnessing can also be seen as a demand to finally have a conversation we were all supposed to have back in 2008. There was a moment, after the near-collapse of the world's financial architecture, when anything seemed possible.

Everything we'd been told for the last decade turned out to be a lie. Markets did not run themselves; creators of financial instruments were not infallible geniuses; and debts did not really need to be repaid – in fact, money itself was revealed to be a political instrument, trillions of dollars of which could be whisked in or out of existence overnight if governments or central banks required it. Even the Economist was running headlines like "Capitalism: Was it a Good Idea?"

It seemed the time had come to rethink everything: the very nature of markets, money, debt; to ask what an "economy" is actually for. This lasted perhaps two weeks. Then, in one of the most colossal failures of nerve in history, we all collectively clapped our hands over our ears and tried to put things back as close as possible to the way they'd been before.

Perhaps, it's not surprising. It's becoming increasingly obvious that the real priority of those running the world for the last few decades has not been creating a viable form of capitalism, but rather, convincing us all that the current form of capitalism is the only conceivable economic system, so its flaws are irrelevant. As a result, we're all sitting around dumbfounded as the whole apparatus falls apart.

What we've learned now is that the economic crisis of the 1970s never really went away. It was fobbed off by cheap credit at home and massive plunder abroad – the latter, in the name of the "third world debt crisis". But the global south fought back. The "alter-globalisation movement", was in the end, successful: the IMF has been driven out of East Asia and Latin America, just as it is now being driven from the Middle East. As a result, the debt crisis has come home to Europe and North America, replete with the exact same approach: declare a financial crisis, appoint supposedly neutral technocrats to manage it, and then engage in an orgy of plunder in the name of "austerity".

The form of resistance that has emerged looks remarkably similar to the old global justice movement, too: we see the rejection of old-fashioned party politics, the same embrace of radical diversity, the same emphasis on inventing new forms of democracy from below. What's different is largely the target: where in 2000, it was directed at the power of unprecedented new planetary bureaucracies (the WTO, IMF, World Bank, Nafta), institutions with no democratic accountability, which existed only to serve the interests of transnational capital; now, it is at the entire political classes of countries like Greece, Spain and, now, the US – for exactly the same reason. This is why protesters are often hesitant even to issue formal demands, since that might imply recognising the legitimacy of the politicians against whom they are ranged....

• Last but not least, check out the dedicated You-Tube channel

Solidarity.
Posted by Matt Christie at 9:44 PM No comments: