A word or two on spalted woods in cutting boards 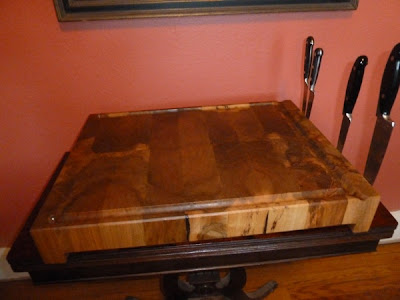 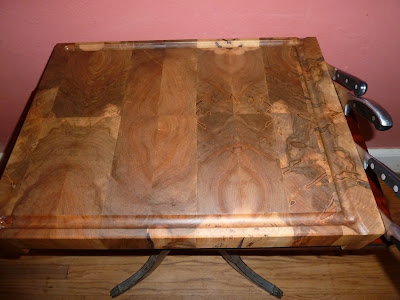 Enough people have asked that it's time I had a public link to my own views on the subject of spalt in cutting boards and chopping blocks.

"Spalting" is actually a stable form of highly-desirable, natural discoloration (if harvested correctly, before the wood turns punky) caused by the presence of various fungi, sometimes intruduced by a parasite (such as the ambrosia beetle), or by moisture, etc.

Different kinds of spalting have different names, such as "dead man's fingers" "ambrosia" etc. Perhaps understandably, when people hear the fine woodworking term "noble rot" or just the pejorative "fungus" they tend to get paranoid about bacteria or poisoning. I've heard this from certain purist corners, especially Japanese knife forums where some board-makers with cult-like followings insist it is improper to use spalted woods for any food preparation whatsoever. Similarly, some people insist on avoiding exotic woods that if themselves consumed in large quantities would probably make you sick. But the amount of potential ingestion is so minimal as to nearly beg comparisons with the non-molecular "effects" of homeopathy. In the absence of any convincing proof to the contrary of common sense, such purist superstitions seem a poor reason to limit oneself to boring old maple, cherry and walnut (especially when there are so many woods worth appreciating, and so many fine scraps being thrown away).

The truth, at least in my own experience of 17-odd years woodworking, is that unless you are perhaps eating your cutting board itself whole (and with end grain you really are not even cutting the wood itself, but rather slicing *between* the fibers, which then "heal" back together) the concern is completely baseless. I have never once heard of anybody being made sick by cutting food on a certain specialty hardwood. Hardwood countertops, including those meant to be chopped upon, are routinely made from spalted maple. More importantly, recent studies have demonstrated again and again that hardwood has natural anti-bacterial qualities, and is in fact more sanitary with proper care than either plastic or glass (neither of which are any fun to cut on)

In fact there should be a law against ruining your knives on glass or bamboo (grass) cutting boards falsely advertised as environmentally "green", in any just society.

Plastic quickly develops rough edges and becomes nearly impossibly to clean, even in a dishwasher, the harsh cleaning products of which are probably much worse for you than any spalting. Wood meanwhile cleans itself, and as long as you are keeping the board cleaned, and the pores of the end grain filled with mineral (never organic) oil, and/or the top coated with beeswax or melted paraffin, I think the concern over spalting is entirely ill-founded. I've had customers with decidedly delicate stomachs use spalted blocks daily for over a decade with no problem whatsoever. And, it is the most beautiful demonstration of the character of the grain, particularly in end grain (almost resembling marble) so why not use it?

Of course, I wouldn't rule out the possibility that someone might have an allergic vulnerability to something I don't know about. Frankly I'm more concerned about the link between complex plastics and pesticides (organochlorines), the cancer industry, and cancer, than any minute amounts of spalting.

People pay through the nose for high-end mushrooms and stinky cheese, companies sell yogurt with live bacteria at a premium, but a little fungus in a beautiful piece of wood is unsafe...probably not. Sometimes a little bit of spalting makes the difference between a board you can get at Wal-mart (with untested and a genuine piece of art.

That being said, I don't reckon any of my "plain" maple boards can be found at Wal-Mart or some factory in China.

Mine are all personally-designed and handmade in Asheville, North Carolina with 90% salvaged wood, and almost always with the needs of specific customers in mind.

Please don't hesitate to ask me about my sliding scale for educators, middle class survivors, workers and non-hedgefunders. 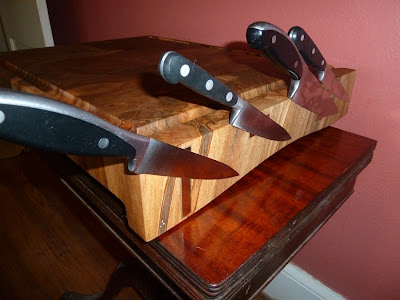 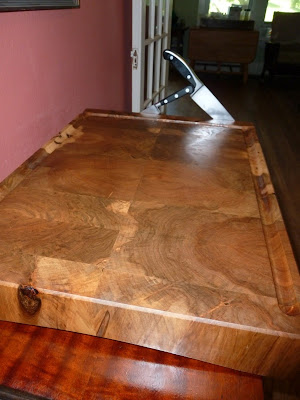 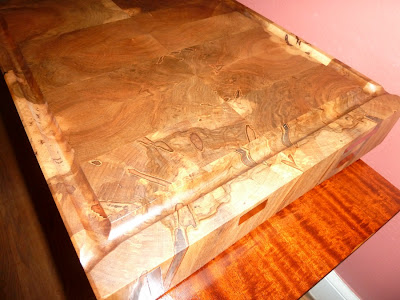 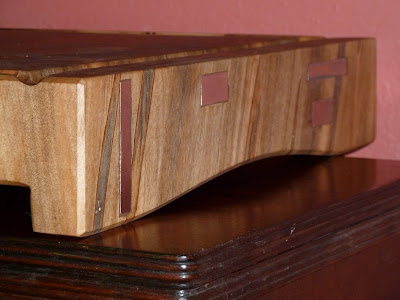 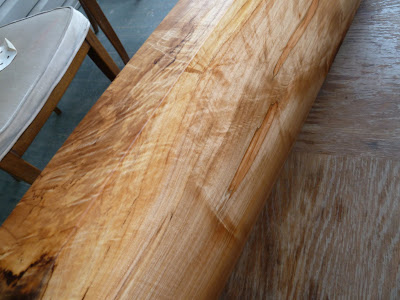 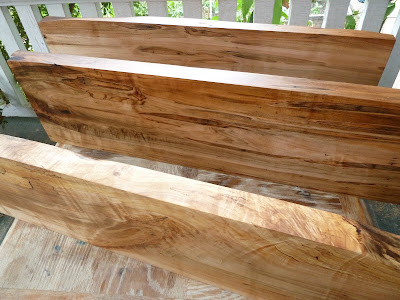