An indispensable new This American Life episode, "Hot in My Backyard" contains riveting stories from a genuine political balance of perspectives, suggesting together something that is all-too-rare in today's media hellscape:  a proper and informed 'pathos of indignation.'

Personally I think it is long past time to risk offending so-sensitive conservatives.

Did you know that if ExxonMobile *alone* simply extracts what is already in their reserves (as indeed the market, including your 401K, currently counts on them to do), the planet tanks (and not in an "engineering problem" sort of way, but irreversibly and horribly)?  We have no stable models (and likely never will) to predict just how climate change will effect weather patterns, other than the obvious consensus that destructive extremes will get much, much worse, and in this fundamentally unpredictable fashion climate change is by any reasonable measure the true "Terror" of our time.

The terrifying reality is that todays climate catastrophes will *very* soon come to be seen as mild, indeed less than average in only 14 years when we reach the universally, world-dreaded two degrees.  And we're currently on track for five degrees. 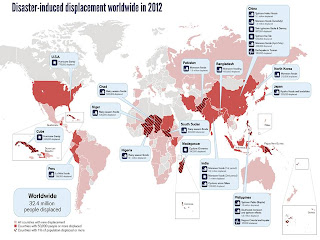 In short, unless the market can be made to believe that those reserves will never be tapped, and adapt accordingly, we're screwed.  Global warming will be so unimaginably horrible in just a few short decades; by the time Exxon executives rouse themselves on their delusional perches to the floodwaters at their ankles, most of the planet will be underwater.

Thank God, the divestment campaign is growing faster than anti-Apartheid did at first, but thanks to fossil fuel industry-purchased Republicans (many of whom are politically afraid to speak what they objectively know to be true) nearly half of all Americans *still* don't grasp what 98.4% of scientists (and even ExxonMobile itself) unambiguously do: that climate change is manmade, very real, and sooner-than-each-previous-study-anticipated irreversible, if not irreversible already.

Contrary to what ExxonMobile would have you believe, an alternative future is not only imaginable but reasonably possible (and it does not involve the quack science nightmare of geoengineering).  Just as one example, there's enough wind power on government-owned land in the mid-western US alone to supply 1/3 of all US energy needs.  Imagine what the world's most profitable company ever to exist, ExxonMobile, could do with its annual $46M, were it forced to pursue energy technology that did not lead straight to Biblical-scale, inevitable mass misery and suffering.  Is their bottom line that precious?

There really is no other news story of our time than this one.

Update:  Ok, maybe also this one.

Posted by Matt Christie at 1:34 PM No comments:

Why French Kids don't have ADHD


From the time their children are born, French parents provide them with a firm cadre—the word means "frame" or "structure." Children are not allowed, for example, to snack whenever they want. Mealtimes are at four specific times of the day. French children learn to wait patiently for meals, rather than eating snack foods whenever they feel like it. French babies, too, are expected to conform to limits set by parents and not by their crying selves. French parents let their babies "cry it out" if they are not sleeping through the night at the age of four months.

French parents, Druckerman observes, love their children just as much as American parents. They give them piano lessons, take them to sports practice, and encourage them to make the most of their talents. But French parents have a different philosophy of discipline. Consistently enforced limits, in the French view, make children feel safe and secure. Clear limits, they believe, actually make a child feel happier and safer—something that is congruent with my own experience as both a therapist and a parent. Finally, French parents believe that hearing the word "no" rescues children from the "tyranny of their own desires." And spanking, when used judiciously, is not considered child abuse in France.

As a therapist who works with children, it makes perfect sense to me that French children don't need medications to control their behavior because they learn self-control early in their lives. The children grow up in families in which the rules are well-understood, and a clear family hierarchy is firmly in place. In French families, as Druckerman describes them, parents are firmly in charge of their kids—instead of the American family style, in which the situation is all too often vice versa.

Posted by Matt Christie at 12:57 PM No comments:

Update:  Krugman doubles down on Reinhart and Rogoff.

Joshua Clover in The Nation:

...in a development Krugman couldn't quite bring himself to declare, his charts suggest that a generally declining labor share since the 1970s has also spelled bad news for overall profitability outside the finance sector. The productivity race wasn't just unfortunate for the unemployed; it was for capital a poison pill of its own making. Thus Krugman's comedy: always on the verge of discovering the arguments of a 150-year-old book; always turning away at the last second. In Krugman's words, "I think our eyes have been averted from the capital/labor dimension of inequality, for several reasons. It didn't seem crucial back in the 1990s, and not enough people (me included!) have looked up to notice that things have changed. It has echoes of old-fashioned Marxism—which shouldn't be a reason to ignore facts, but too often is. And it has really uncomfortable implications."
Does it? I suppose so. And that uncomfort is what pop, for all its pleasures, must defer. Pop must affirm the way things are, no matter how often it choruses the word "change." You cannot be Paul Krugman, Pop Star, and at the same time discover that capital is built to break us, and itself—even if your charts so testify. So you will not be shocked to discover Krugman stepped back from this realization and continued about his business, scarcely speaking of it again. There are some things you do not say. They are not popular.

Posted by Matt Christie at 12:53 PM No comments: